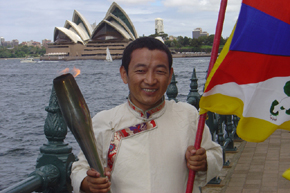 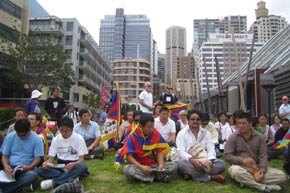 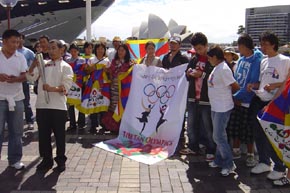 The Sydney leg of the Tibetan Olympics Torch Relay getting started.

SYDNEY, Australia, 17 February 2008 — Countering the Beijing Olympics slogan of "One World, One Dream", a torch relay held by Tibetans in Sydney will bring attention to the fact that Chinese-occupied Tibet is forbidden to enter the real event.

The torch will travel through Sydney on 17 February 2008, starting at 11.00 a.m. at Circular Quay and will proceed up George Street to finish at Darling Harbour at 12.30 p.m.

It is also designed to bring attention to the Tibetan Olympics (www.tibetanolympics.com) being held in the exile-hometown of the Dalai Lama, Dharamshala in India, on 15-25 May 2008.

It will then travel across five continents before arriving in Dharamshala for the start of the Tibetan Olympics.

Tenpa, a Sydney Tibetan resident states: "I am keen to support an initiative by a Tibetan living in exile. I also want Beijing to know that Tibetans in Sydney and around the world are upset and angry with the deterioration of human rights and religious freedom in Tibet since China was awarded the Olympics."

"I also want all competing nations at the Olympics to see that the Tibetan-exiled communities can perform well at sporting events, with professionalism, team spirit and good ethics. If they cannot demonstrate this at the main Olympics, then they are given a second chance to show their enthusiasm to participate through the Tibetan Olympics."

Director Lobsang Wangyal, who is based in India, chose the motto "One World, Many Dreams" to counter the Beijing Olympics slogan "One World, One Dream".

[an error occurred while processing this directive]

More about the Sydney leg

Our official carrier is Himalaya Tours and Travels

Media persons can contact them for accommodation and transportation arrangements.